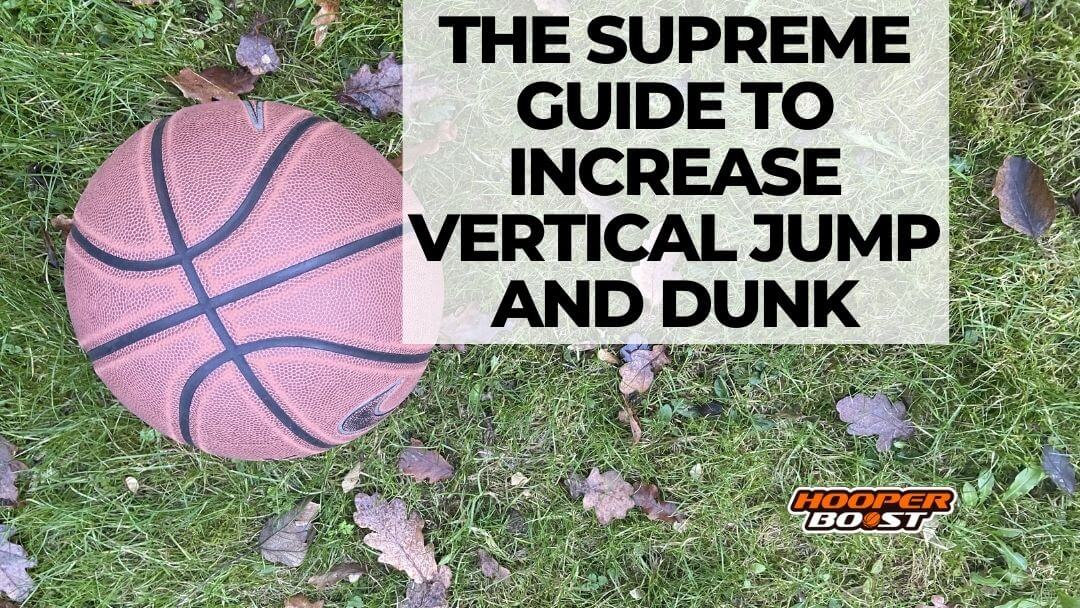 The goal here is for you to have the info you need to increase vertical jump and dunk a basketball.

So, let’s get straight to learning how to jump higher.

If you want to boost the height of your jump, you need to be doing the right training.

You gotta work smart, as well as hard.

This refers to improving the raw force production of your muscles.

One thing to point out first…

But in the end, they aim to achieve different goals.

So with that in mind, let’s focus on our goal: jumping high.

It’s important to master exercises with your bodyweight first, before using weights.

This will reduce the risk of injury AND prevent bad habits in your body’s movement.

Even after weights are added, technique should still be your primary focus.

To increase vertical jump, there are two weightlifting exercises which I recommend:

These are both compound movements which mimic the motion of jumping, training multiple muscle groups.

However, you can also add exercises to focus on your weaker muscles. (e.g. calf raises for calves, leg curl for hamstrings)

NOTE: as you improve, focus more on high weight and low reps when lifting.

Remember, the goal is jumping higher, NOT bodybuilding.

To increase vertical jump, this is just as important as strength training, if not more.

If you didn’t know, now you know…

Think about it… olympic weightlifter are never the quickest/most explosive athletes.

Meanwhile, some of the world’s best dunkers have “skinny” legs and aren’t constantly squatting.

This isn’t to say strength training is pointless or doesn’t help. It definitely does.

But, to jump higher, plyometrics is key.

Here, we’re not really aiming to break down your muscles.

So, use a low number of reps each set, with sufficient rest time.

The goal is maximum force and power on each jump.

Try to train a variety of exercises. (some jumps off one foot, some off two, different directions, etc.)

When moving, your body will always prioritise the safety of your spine.

This is (partly) why I recommended compound movements for lower body strength training.

Some core exercises to try:

I remember as a young teenager, doing a bunch of sit-ups every night trying to get a six-pack.

Did I get it? Eventually, yes (but that’s not the point).

Was I improving my core strength as much as I could have?

As you can see with the example exercises, your abs aren’t the only muscles in your care.

Plus, crunches/sit-ups aren’t the only (or necessarily the best) exercise.

The plank works to prevent motion rather than create it.

This translates much better for the stability needed to increase vertical jump.

The lower back muscles help you to explode out of lowered positions.

Meanwhile, the obliques (muscle on the side of your stomach) help to create and prevent rotation of the body.

Mobility refers to the ability to command your body’s movements at its joints.

Training mobility is essential because it allows for controlled movement through an increased range of motion.

This is overlooked by MANY, who just end up missing out on athleticism.

Don’t be another that makes this mistake.

During the lockdown (Summer 2020), there was limited access to gyms.

Despite this, I was still able to maintain my vertical jump and learn some new dunks.

Apart from going to the park to practice, most of my training at home was just mobility.

If you’re serious about seeing results, make sure to stretch throughout your lower body at least once every two days.

2. Jumping technique for a higher vertical

However, without good jumping technique, you’ll be severely limiting yourself.

But, before going through these jumping technique tips…

Remember, the aim ISN’T for you to cram all the technique tips into your head before a jump.

The aim is to practice the technique so it becomes natural.

As you lower into the jump, swing your arms back.

As you explode out of the jump, swing your arms upwards.

Even with the ball in your hands, you can still help yourself.

As you explode upwards, aggressively bring the ball upwards too.

Don’t just let gravity lower you to the ground before jumping.

Actively lower yourself (“attack the floor”) and then push off to take advantage of the elastic property of your muscles.

NOTE: This elastic property must be trained, so your jump might get worse initially.

But, as you practice, this property will develop and you’ll figure out how aggressively to lower yourself.

So, full extension at…

This will help you to fully explode through the jump.

Triple extension can be a useful tip for jumping in general, but is especially important for a standing jump.

Tip 1: Accelerate through your approach

Especially for the one foot jump, your running speed at takeoff is crucial.

A few choppy steps won’t hurt at the beginning of your approach.

But, your speed must be increasing up until takeoff.

Slowing down before your final steps will hurt your jump off one foot.

This habit can be difficult to get rid of initially, but your run-up will get smoother with consistent practice.

As you takeoff with your jumping leg, swing your knee on your non-jumping leg upwards aggressively.

By combing the jumping leg force with an opposite knee swing, you’ll help increase vertical jump off one foot.

This refers to the second to last step, just before takeoff.

A long penultimate step will help you out in two ways:

If this is confusing, here’s a more detailed guide on two foot jumping.

Tip 2: Accelerate into the jump

With a two foot jump, speed at takeoff is less important than with a one foot jump.

However, it’s still important that you don’t slow down before takeoff.

A lot to remember? As I said the aim ISN’T for you to cram all of this in your head.

Make sure to practice so that this technique becomes natural.

3. Attitude and mindset of a great jumper

Often, when people are trying to increase vertical jump and learn how to dunk, it’s their attitude that lets them down.

PRACTICE DUNKING (OR YOUR ATHLETIC GOAL)

Most of the time, people have a reason for trying to increase vertical jump.

But, it could be anything (e.g. spiking a volleyball better).

My point is, whatever your end goal is, you need to also practice that too.

Often, people get caught up in the training process.

As a result, they do strength training, plyometrics and more, but forget to practice dunking itself.

Whatevert the explosive movement, training will of course help.

However, the goal (e.g. dunking) is a specific and unique movement that demands practice too.

Here, I’ll use myself as an example.

After getting my first in-game dunk, I told my teammates “I’ll be doing windmills next season”.

It was a passing comment, and I’m sure most of them thought I was joking.

But… deep down… I really wasn’t.

Then, as promised, I posted this on my Instagram early the next school year:

That’s all my friends saw… the end result.

What they didn’t see was the HUNDREDS of missed attempts and days with sore legs.

Increasing your vertical jump and improving your dunking ability is a gradual task.

I’m not sure about you, but if I woke up tomorrow and had my vertical jump maxed out at 55 inches, it would only be cool for a bit.

You’ve got enjoy the process.

LOOKING AFTER YOUR BODY

Yes, you have to do the training to increase vertical jump.

But, all the actual progress happens as your body recovers after training.

If you’re serious about improving, you have to be looking after your body.

Here are some tips to help:

Often, when trying to increase vertical jump and dunk, you might feel like you’ve hit a brick wall in your progress.

Here are some common mistakes to check for.

In all jump training, you’ll experience a fall in your vertical at first, as you are fatigued.

As your body recovers to build your muscles back up, that’s when you’ll see real improvement.

Even if your muscles aren’t tired, your central nervous system could be.

This is often the case with jump training, and might explain why you feel sluggish.

After an extended period training, rest for however long is appropriate. (e.g. 3-6 days)

But, include some light activity such as stretching (nothing intense).

This will help keep blood flowing to your muscles and increase the rate of recovery.

Another mistake you could be making is a lack of balance in your training.

Maybe you’re trying to jump higher and all you do is lift weights.

Then, you might need to focus on more on explosive plyometrics movements.

Or, you could be doing a bunch of jumps, but not enough stretching and weightlifting.

Perhaps your goal is to dunk and you’re doing all the right training, but forgetting to practice dunking itself.

Don’t get me wrong. If you decide that jumping higher is no longer for you, that’s fine.

But, if you have a burning desire to increase your vertical and you’re finding things difficult?

You can’t give up.

It can be so frustrating when it feels like you’re not improving.

Trust me, I know.

Maybe take a little break, but you gotta come back and keep pushing. 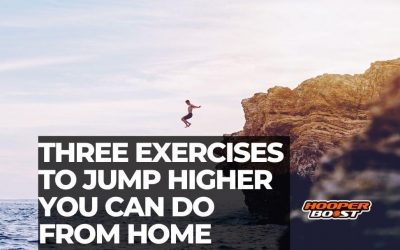 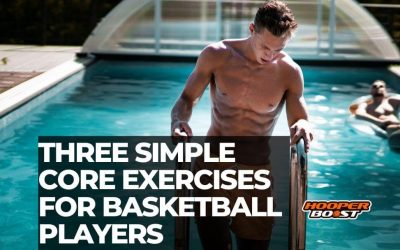 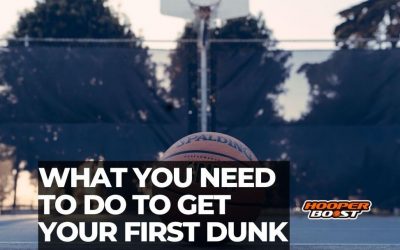 What you need to do to get your first dunk